I had always pictured the events of the game to be set in rural England, allowing a beautiful environment for the player to explore that offered the opportunity for navigation of nature and populated areas. From my initial development I deemed it imperative that Hope had other people to interact with, but I also wanted an environment that leant itself to that “lost in the woods” coming of age journey – that mystical, borderline magical environment that seems to have a life of its own.

In order to juggle both of these requirements, as well as set the story in a place that makes cultural and historical sense for the story of grief I’m trying to tell (see sketchbook 1 pages 35-37) I looked to some of the places I have lived and visited in the past that would tick all the criteria. I looked at Devon and Cornwall and also the Cotswolds. Doing some visual research, I complied mood boards of both environments to compare.

Plotboard helps you to easily arrange photos and text on a grid. Make your moodboards, photo collages, choose style, compare makeups right on your mobile device. Plotboard is particularly liked by designers. You can import photos from Pinterest boards or directly from Google Image Search. More info http://plotboard.io or https://www.pinterest.com/plotboard/

Plotboard helps you to easily arrange photos and text on a grid. Make your moodboards, photo collages, choose style, compare makeups right on your mobile device. Plotboard is particularly liked by designers. You can import photos from Pinterest boards or directly from Google Image Search. More info http://plotboard.io or https://www.pinterest.com/plotboard/

I found myself more drawn to the Cotswolds, appreciating its distinct visual architecture, the predominant colour of the limestone and the square, clean shapes of the residential buildings. It’s natural environment offers up forests, fields, rivers and more, giving me a lot of room to make a varied environment that will influence the narrative. Also keeping in mind the Gates of Review, especially the gate of Artistic Impulse, I found myself finding that the Cotswolds simply fit the feel of the game better than the Devonshire countryside.

Once I had developed my narrative around this environment, I realised I needed some more specific research into this area for the purposes of the environment art. This research (sketchbook 1 page 82) shed light on the architecture and especially the tree types found in that area of England. I chose four tree species that varied in shape and colour and then began playing around with how I would represent these visually in accordance with the style of my characters. 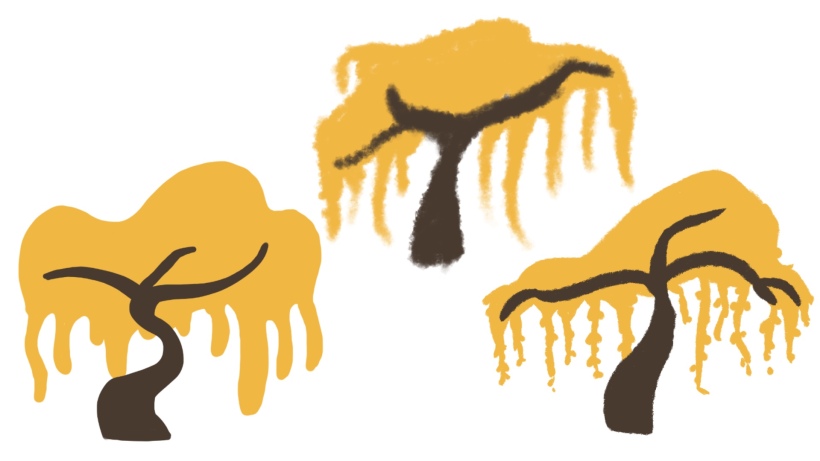 The willow tree was the species with the most distinct shape, so I used this for experimentation. I found the first iteration the best, matching the clean but stylised shapes of my human characters nicely – the willow has a recognisable silhouette and it’s best represented through using the same brushes as for the characters. I naturally erred on the side of exposing all the branches in a minimalist fashion because of the attractive contrast it creates between leaf and bark. Hiding the layer of the branches behind the leaves confirmed my suspicions and so I left them overlaying instead,

I used that initial design as a springboard for my other tree species.

Once I was satisfied that I’d captured the essence of each tree species, I moved on to shading style. I knew I wanted my environment to be without line-art so it didn’t clash with the characters and made them pop out of the scene, but I did want shading, as the simple two-toned trees I created were a little rudimentary. I compiled some visual research from artists who use Procreate, the same program I use for my art, so see the different ways they tackle environment design. I imitated their techniques with my own spin, and keeping in accordance with the block shading I used for my characters. 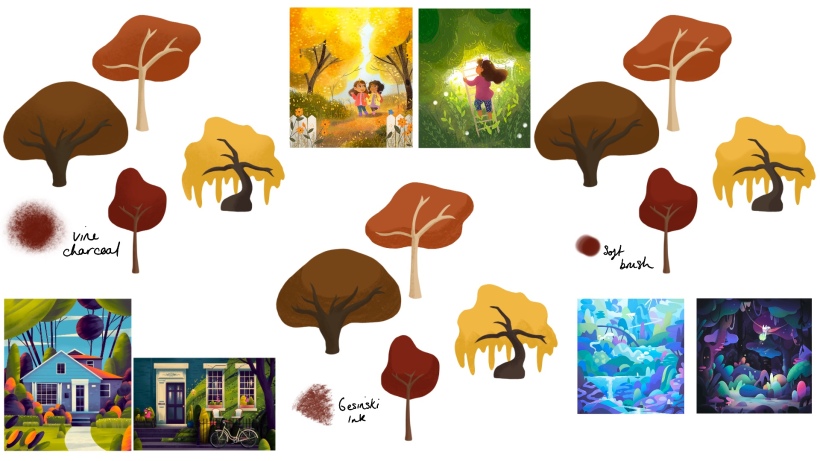 While I anticipated that I’d like the third technique best, I ended up preferring the shading with the vine charcoal brush. It still gave a soft but contrasting shadow, with some element-appropriate texturing that didn’t overwhelm the shapes as in the second technique.

From there I mocked up a piece of concept art based on the setting where Hope meets Teddy by the river, including as many of the aspects of the environment I could without cluttering the scene.

I used the vine charcoal brush for almost everything, but encountered some difficulty when trying to shade the flat surfaces of architectural structures. The brush I’d chosen for the trees didn’t look appropriate, so some experimentation was needed until I used one of Procreate’s brushes called stone wall. It gave a brilliant texture that captured the Cotswolds limestone perfectly. I used the streakier sable brush to give a little more motion to the river, and Procreate’s original watercolour brush for the blending of the sky. I’m extremely pleased with the outcome, finding that when inputting characters they pop out of the screen against the background, but also fit comfortably within it and look like they’re a part of it.